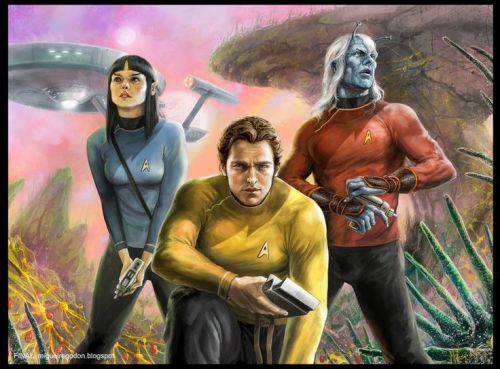 Prime Directive was a weird animal, because despite appearances, it wasn’t a tabletop RPG based around Star Trek, but around the long running Star Fleet Battles board game from the 1970s. Because it was made before the movies and next generation, the board game spun off and developed this totally mind-boggling counter-continuity. It’s like the original series in an alternate universe. Because Star Fleet Battles didn’t use the Star Trek trademark, it had a way cheaper licensing fee, so it was a way for smaller publishers to get a “Star Trek RPG” on the cheap.

The “hook” of Prime Directive is that the PCs are members of “Prime Teams,” squads of Starfleet officers and other oddballs who go on impossible missions that require scientific, technical, and commando expertise. Kind of reminds me of Mass Effect, actually.

What’s interesting is how the alternate “counter-continuity” of Prime Directive developed on lines similar to the later spin off shows, long before they came out. For example, the Federation faces a mostly unstoppable invasion of superadvanced machine creatures (this time, related to the Andromeda aliens), and also encounter an “evil Federation” on the far side of the galaxy (basically, the Dominion before the Dominion existed).